Home » The Tower (or House of God) 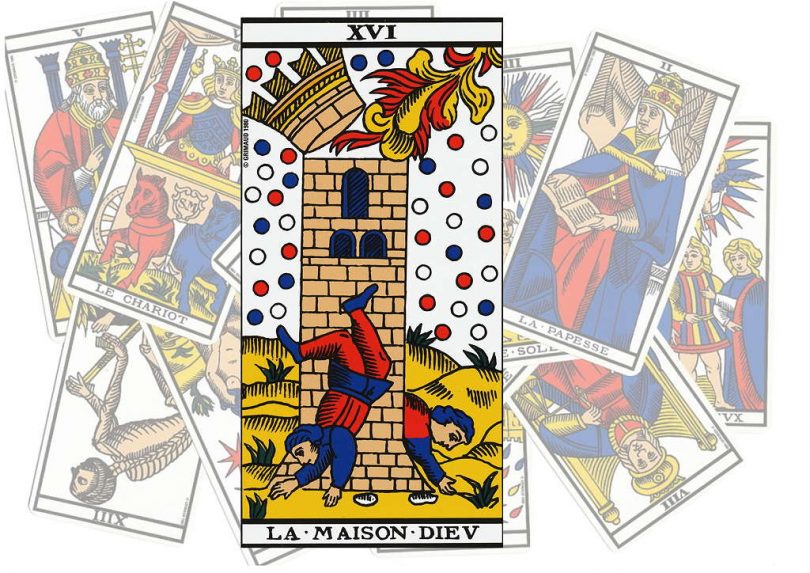 What is the meaning of the tower tarot map?

A pillar of bricks and stones rising high in the clouds, struck by lightning and ablaze by the power of nature, is the surprising image of La Tour.

When this card appears to you in a reading, this can be quite surprising.

The tower represents change. The proverbial stuff hitting the fan.

This map depicts unruly and inevitable chaos, although it is rarely an omen to be feared.

Change happens, and you may not be prepared for that, although with all things in life, it comes up against both positive and negative aspects.

When one part of your life is corrupted, other aspects thrive. The Tower consists of giving and receiving, even if it leaves you temporarily desperate.

The tower brings up a heartbreaking devastation, if you will. A card with this type of edge is a warning, but not a sentence.

Keeping a calm mind in the face of a difficult time means that the change made is a learning lesson as well as a catalyst for new opportunities.

Meaning of The Tower: Map to the Spot

Just like the other maps that make up the Major Arcanes, it is important to observe the maps appearing around The Tower and its position in your spread.

These aspects will help you better determine the part of your life in which the Tower sounds the alarm.

If The Tower appears in your past position, it indicates a situation in your past that has not been properly resolved.

This could have been an argument with a friend, a quarrel with a family member or an explosive breakup.

In any case, this event has not been properly resolved and is the cause of your current situation.

If you feel like you’re good, be on your guard to make the past resurface.

The tower in your current position means that big changes are coming.

It is important to consider where you are now and to answer honestly if any of its aspects are failing.

You may have ignored the red flags.

If all goes really well, you can expect news that seems to come out of nowhere.

Be on your guard and look at the map sitting in your past and future positions to try to determine what part of your life it may affect.

When appearing in a future position, the Tower acknowledges that the warning signs have already been highlighted.

Change is inevitable, but it is the best case because you already expect it, consciously or unconsciously.

The Work and the Tower

When The Tower appears in your professional life, you dare to think about the skills and talents you might fall back on if your position was disturbed.

This could be a sign that pink slips are coming and it’s only a matter of time before you’re looking for something new.

It is better for you to take an opportunity like this to start over and prepare yourself a better path than the one you will be forced to leave.

Love and the Tower

Has there been open and honest communication between you and your partner?

When the Tower shows up in a spread-out relationship, it tells you that your relationship is about to change.

While this is not necessarily a bad omen, it is important that you understand that change is permanent.

For those who are single, the Tower says to consider how you wear yourself and the kind of people you attract into your life.

Something has to change if you hope to have luck in love.

The tower and finances

This is not the time to take risks with your money when the Tower comes into play.

It’s important to keep your savings, as the tides are about to change in a way that could leave your bank account dry.

Get ready for a monetary setback.

Meaning of the healthy tower

If the tower appears in a health-focused broadcast, it is imperative that you be realistic about your health.

If you are worried about getting sick, it is a sign that you must stop, otherwise you run the risk of making yourself sick.

If you have recently had surgery or are experiencing serious health problems, the Tower brings you the good news that you will soon be on the road to recovery.

The tower in reverse position

In reverse position The Tower means that changes have already been set in motion. Whether you have been assigned at this stage or not does not matter.

Keeping your head down and holding on until the chaos subsides is your best plan of action.

Trick combinations If t
he Star appears after the Tower in your reading, it means that the event described by the Tower will all end for the better as long as you follow your intuition.

The tour map in tandem with the Lovers card speaks directly to your personal relationships. It’s a warning that ties will be broken, but it’s also a sign to draw your attention to building relationships with new people despite this setback.