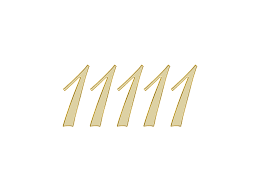 One of the things that makes 2018 so special is that it's a year 11. In numerology, the number 11 is considered a master karmic number that holds a sacred vibration.

It is thought that the vibration of the number 11 can create spiritual awakenings and unlock the divine realms.

When you often see the number 11, it is considered a sign of your angels and spiritual guides that you align yourself with your higher destiny and on a wave of higher consciousness.

All numbers have their own sacred vibration and meaning, but 11 continually stands out as one of the most informative and transformative.

11 is also considered to represent a perfect balance between the masculine and the feminine, the material world and the spiritual world. It represents an entry into alignment and balance.

This vibration will last throughout 2018, but dates such as January 1, January 11, November 1 and November 11 will keep this energy in its highest form.

On these dates, we will all be able to experience the vibration and gifts that number 11 offers us.

You may be wondering how numbers can affect the energy and vibrations of what we live, but if you look a little deeper, it is possible to see that numbers have creative potential, and their creative potential reflects the formation of life on earth and as a whole. Universe.

This is an ancient acquaintance that was brought to life by Pythagoras. Although Pythagoras was considered a mathematician, he was also a philosopher and believed that "all things are numbers".

In fact, the study of numerology began when people began to recognize that there was an order in the Universe and that by understanding that order, they could reveal the secrets of life.

Nikola Tesla also stated that "if you only knew the magnificence of the 3, 6 and 9, then you would have the key to the Universe."

Each number has its own vibration and place in the creation of the Universe. When they understand how things are created or manifest in reality, most numerologists focus on numbers from 1 to 9. With 1 representing the beginning and 9 representing the end.

The number 11, however, is supposed to contain the vibration of the number 1 twice, making it more powerful.

On days like January 11, we can use the energy of the sacred number 11 to raise our level of consciousness, connect with higher realms and visualize or make a wish about what we want for the future.

Throughout 2018, gateway 11 will be activated and we will all be able to experiment and adapt to the higher vibrations that follow.

On dates such as January 1 and 11 and November 1 and 11, if you stay focused on your mind and connect, you may feel an increased vibration or you may be able to show what you want on earth faster.

These days, spend time meditating and visualizing your energy merging with that of God or the Divine. You can also reach out to your angels, spiritual guides or even your deceased loved ones for comfort and guidance.

You can also use this energy to visualize something you would like to create in your life. You can set an intention and start putting the pieces in place to start expressing your wish in material form.

Globally, this energy 11 will activate spiritual awakenings and inspire people to think about how they can help others and help make this world a better place.

Stay tuned to the vibrations and energies you feel in January with Gateway 11111 and see how they change, move or manifest between now and November, where we'll have the ultra-powerful 111111 bridge.